I think this is one of the most significant entries I will have written. I have struggled for hours to begin to type and piece together what has taken months, if not years to learn, and condense it into a clear and concise article. It is a wonder that Isaiah is able to put so much information into so few words and without a solid background and understanding of the Lord’s work in His vineyard as a whole, which spans dispensations and all the players involved, it is nearly impossible without the spirit of revelation to begin to comprehend his prophecies.

In Isaiah 5 we read the following verses:

26 And he will lift up an ensign to the nations from far, and will hiss unto them from the end of the earth: and, behold, they shall come with speed swiftly:
27 None shall be weary nor stumble among them; none shall slumber nor sleep; neither shall the girdle of their loins be loosed, nor the latchet of their shoes be broken:
28 Whose arrows are sharp, and all their bows bent, their horses’ hoofs shall be counted like flint, and their wheels like a whirlwind:
29 Their roaring shall be like a lion, they shall roar like young lions: yea, they shall roar, and lay hold of the prey, and shall carry it away safe, and none shall deliver it.
30 And in that day they shall roar against them like the roaring of the sea: and if one look unto the land, behold darkness and sorrow, and the light is darkened in the heavens thereof.

Here, Isaiah is prophecying in five verses many significant events that will occur in a span of over a century. In verse twenty-six, the Lord will establish Zion, which will be the ensign unto all nations by means of the restoration of His church and the fullness of the gospel. In the next two verses we read about the rate at which the restored gospel will be carried as the gathering of lost tribes of Israel commences. There is a lot of imagery here that emphasizes a great sense of urgency.

During Isaiah’s time, people traveled by horse, chariot, camel, donkey, on foot, etc. Today, we have cars, airplanes, cell phones, internet, etc. In other words, our hoofs are like flint. Blinding light speed! Wheels like whirlwind. I’m not sure how fast they traveled back then on chariots, but today, cars and trucks speed along highways and airplanes achieve a substantial speed before they take off into the air. We are living in a time of advanced technology.

The last two verses now refers to the role of the remnant of Israel, which was scattered by the Gentiles in the new world. In the Book of Mormon, we have four great commentaries on Isaiah, each by Nephi, Jacob, Abinadi and the Savior Himself. In His visit to the New World, Jesus Christ admonishes the people to search the words of Isaiah and he expounds to them a portion concerning their role:

3 Nephi 20
11 Ye remember that I spake unto you, and said that when the words of Isaiah should be fulfilled—behold they are written, ye have them before you, therefore search them—
12 And verily, verily, I say unto you, that when they shall be fulfilled then is the fulfilling of the covenant which the Father hath made unto his people, O house of Israel.
13 And then shall the remnants, which shall be scattered abroad upon the face of the earth, be gathered in from the east and from the west, and from the south and from the north; and they shall be brought to the knowledge of the Lord their God, who hath redeemed them.
14 And the Father hath commanded me that I should give unto you this land, for your inheritance.
15 And I say unto you, that if the Gentiles do not repent after the blessing which they shall receive, after they have scattered my people—
16 Then shall ye, who are a remnant of the house of Jacob, go forth among them; and ye shall be in the midst of them who shall be many; and ye shall be among them as a lion among the beasts of the forest, and as a young lion among the flocks of sheep, who, if he goeth through both treadeth down and teareth in pieces, and none can deliver.
17 Thy hand shall be lifted up upon thine adversaries, and all thine enemies shall be cut off.

Just as the Lamanites became a scourge to the Nephites to “stir them up in ways of remembrance,” so will the Lamanites become a scourge to the Gentiles in the last days. Notice in verse sixteen that they shall be as lions not only among the flocks of sheep, but also the beasts of the forest. None shall be immune. Those who fight against Zion because of their wickedness and also those in Zion who are asleep. As Nephi put it, they will not “search knowledge” and will remain in ignorance, thinking all is well in Zion. These are the foolish virgins of whom Christ spoke during His mortal ministry.

D&C 87 is a short chapter, but in it, the Lord reveals that wars and rumors of wars will abound beginning with the civil war and continue because the Gentiles will not repent:

5 And it shall come to pass also that the remnants who are left of the land will marshal themselves, and shall become exceedingly angry, and shall vex the Gentiles with a sore vexation.

24 And this I have told you concerning Jerusalem; and when that day shall come, shall a remnant be scattered among all nations;
25 But they shall be gathered again; but they shall remain until the times of the Gentiles be fulfilled.
26 And in that day shall be heard of wars and rumors of wars, and the whole earth shall be in commotion, and men’s hearts shall fail them, and they shall say that Christ delayeth his coming until the end of the earth.
27 And the love of men shall wax cold, and iniquity shall abound.
28 And when the times of the Gentiles is come in, a light shall break forth among them that sit in darkness, and it shall be the fulness of my gospel;
29 But they receive it not; for they perceive not the light, and they turn their hearts from me because of the precepts of men.
30 And in that generation shall the times of the Gentiles be fulfilled.

In the above quoted scriptures we read about there being a darkness in the land and light in heaven being darkened. And this is probably the saddest part and why Nephi mourned when he wrote to us, telling us that we will not “search knowledge.”

What is this darkness then? There is only one answer–revelation, more specifically–personal revelation. And Jesus Christ tells us why in D&C 84:

53 And by this you may know the righteous from the wicked, and that the whole world groaneth under sin and darkness even now.
54 And your minds in times past have been darkened because of unbelief, and because you have treated lightly the things you have received—
55 Which vanity and unbelief have brought the whole church under condemnation.
56 And this condemnation resteth upon the children of Zion, even all.
57 And they shall remain under this condemnation until they repent and remember the new covenant, even the Book of Mormon and the former commandments which I have given them, not only to say, but to do according to that which I have written-
58 That they may bring forth fruit meet for their Father’s kingdom; otherwise there remaineth a scourge and judgment to be poured out upon the children of Zion.

When the Book of Mormon prophets address us, they are addressing the gentiles, both in Babylon and in Zion (aside from the Jew and the remnants of Israel). It was the gentiles who restored the gospel of Jesus Christ and it was the gentiles who were given this privilege, “for thus it behooveth the Father that it should come forth from the Gentiles, that he may show forth his power unto the Gentiles, for this cause that the Gentiles, if they will not harden their hearts, that they may repent and come unto me and be baptized in my name and know of the true points of my doctrine, that they may be numbered among my people, O house of Israel.”–3 Nephi 21:6

The Church of Jesus Christ of Latter-day Saints is still under this condemnation today. And because the gentiles do not repent and because the saints have treated lightly their heavenly gift, the Lord has promised to send a cleansing scourge throughout America and it will begin among the weak saints. He gave this revelation in Kirtland, Ohio in 1833:

D&C 97:
22 For behold, and lo, vengeance cometh speedily upon the ungodly as the whirlwind; and who shall escape it?
23 The Lord’s scourge shall pass over by night and by day, and the report thereof shall vex all people; yea, it shall not be stayed until the Lord come.
24 For the indignation of the Lord is kindled against their abominations and all their wicked works.
25 Nevertheless, Zion shall escape if she observe to do all things whatsoever I have commanded her.
26 But if she observe not to do whatsoever I have commanded her, I will visit her according to all her works, with sore affliction, with pestilence, with plague, with sword, with vengeance, with devouring fire.

And in 1837, the Lord emphasized His revelation again:

Has this already begun? Perhaps it has and we have been given a sign. In 1999, the heart of Salt Lake City, Utah was unprecedentedly hit with a tornado, which swept through a very concentrated area, destroying buildings and causing extensive damage, of which Temple Square and the Assembly Hall was not immune. 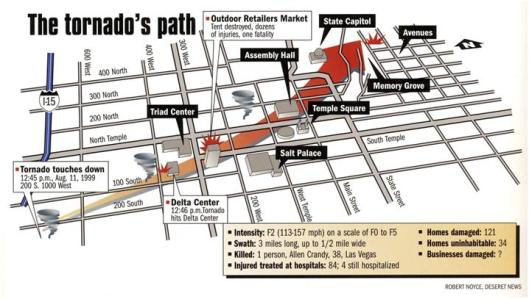 The University of Utah’s meteorology department caught dramatic video of the tornado that hit downtown Salt Lake City on August 11, 1999 and can be viewed here and from a news channel here, both on Youtube.

The times of the Gentiles is very nearly fulfilled. In conclusion, I will quote the prophet Orson Pratt, who Brigham Young called the “prophet to the  prophets” for his uncanny ability to get it right:

But the Latter−day Saints are not in darkness; they are the children of light, although many of us will actually be asleep. We shall have to wake up and trim up our lamps, or we shall not be prepared to enter in; for we shall all slumber and sleep in that day, and some will have gone to sleep from which they will not awake until
they awake up in darkness without any oil in their lamps. But, as a general thing, the Saints will understand the signs of the times, if they do lie down and get to sleep. Others have their eyes closed upon the prophecies of the ancient Prophets; and not only that, but they are void of the spirit of prophecy themselves.

When a man has this, though he may appeal to ancient Prophets to get understanding on some subjects he does not clearly understand, yet, as he has the spirit of prophecy in himself, he will not be in darkness; he will have a knowledge of the signs of the times; he will have a knowledge of the house of Israel, and of Zion, of the ten
tribes and of many things and purposes and events that are to take place on the earth; and he will see coming events, and can say such an event will take place, and after that another, and then another…and he will have his eye fixed on the signs of the times, and that day will not overtake him unawares…

3 thoughts on “Times of the Gentiles”