While studying King Hezekiah’s relationship with the prophet Isaiah, I realized something else. Without God to uphold our hearts, we tend to fail every time He tests us. In other words, when God withdraws His Spirit and we feel abandoned, we discover the true nature of our own hearts.

2 Chronicles 32:31 ¶ Howbeit in the business of the ambassadors of the princes of Babylon, who sent unto him to inquire of the wonder that was done in the land, God left him, to try him, that he might know all that was in his heart.

He had put his trust in God during the Assyrian invasion and was given an additional fifteen years of life. But when the Lord withdrew to test him, Hezekiah ultimately became accountable for the Babylonian captivity. When we feel abandoned, we all stray. Some of us become monsters.

But He does care. That is why he steps away periodically. Like a parent who teaches her toddler to walk, He must step away. I remember when one of my sisters was a toddler and still learning to walk. My mother set her at one end of the living room on her wobbly legs and walked to the other end. My sister began to cry because Mom appeared to abandon her. Desperate to be near my mother, my sister began to take one step and then two. Crying and striving to reach Mom, she inched her way forward one wobbly baby step at a time. She has been walking and running ever since. What is the solution?

Matthew 26:41 Watch and pray, that ye enter not into temptation: the spirit indeed is willing, but the flesh is weak.

William Gurnall wrote that all our strength is fetched without doors, or in other words, outside of ourselves:

“Reason Second.  The second reason may be taken from the absolute necessity of this act of faith above others, to support the Christian in the hour of temptation.  All the Christian’s strength and comfort is fetched without doors, and he hath none to send of his errand but faith; this goes to heaven and knocks God up, as he in the parable his neighbor at midnight for bread: therefore, when faith fails, and the soul hath none to go to market for supplies, there must needs be a poor house kept in the meantime. Now faith is never quite laid up till the soul denies, or at least questions, the power of God.  Indeed, when the Christian disputes the will of God, whispering within its own bosom, will he pardon? Will he save? This may make faith go haltingly to the throne of grace, but not knock the soul off from seeking the face of God.  Even then faith on the power of God will bear it company thither: ‘If thou wilt, thou canst make me clean;’ if thou wilt, thou canst pardon, thou canst purge.  But when the soul concludes he cannot pardon, cannot save, this shoots faith to the heart, so that the soul falls at the foot of Satan, not able more to resist; now it grows more listless to duty, indifferent whether it pray or not, as one that sees the well dry breaks or throws away his pitcher.”–William Gurnal, The Christian in Complete Armor.

The strength to flee temptation comes only from God. And that strength comes only through prayer. Without prayer, we fail. How strong are we when God steps back to test our hearts?

Matthew 27:45 Now from the sixth hour there was darkness over all the land unto the night hour.
46 And about the ninth hour Jesus cried with a loud voice, saying, Eli, Eli, lama sabachthani? that is to say, My God, my God, why hast thou forsaken me?

Jesus Christ suffered intense agony for six hours nailed to the cross while the effects of countless lashes had ripped his flesh, thorns had pierced his brow, spikes had pierced nerves in his extremities, hunger and thirst afflicted his body, and gravity made it all the more unbearable. But He did not waver from his mission. He had spent the entire night before in Gethsemane praying and also suffering. Prayer was His constant companion. He was no stranger to an entire night of prayer. He was no stranger to forty days of praying and fasting. But imagine for a moment, if He had stepped down from the cross, being abandoned or, rather, forsaken by His Father to become a monster and to smite the Romans who inflicted so much pain on Him and to make all the high priests wither as dried reeds, or to become as chaff that disappears in the wind and to strike down all those who mocked Him while He suffered intense agony. Only a monster would do such a thing. But Jesus was not a monster. Though capable of destruction of cosmic proportions, as demonstrated by the great flood during Noah’s day, or the pestilences inflicted upon Pharaoh in Moses’ day, Jesus Christ, the God of all creation humbly, meekly, and willingly suffered all things of His own will. Without His Father to uphold His heart, Jesus Christ upheld us all. He, and He alone carried all our guilt. 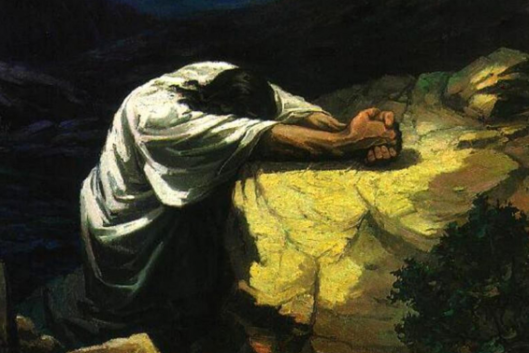 “God left him to himself in it, to try him, v. 31. God, by the power of his almighty grace, could have prevented the sin; but he permitted it for wise and holy ends, that, by this trial and his weakness in it, he might know, that is, it might be known (a usual Hebraism), what was in his heart, that he was not so perfect in grace as he thought he was, but had his follies and infirmities as other men. God left him to himself to be proud of his wealth, to keep him from being proud of his holiness.

It is good for us to know ourselves, and our own weakness and sinfulness, that we may not be conceited or self-confident, but may always think meanly of ourselves and live in a dependence upon divine grace. We know not the corruption of our own hearts, nor what we shall do if God leave us to ourselves. Lord, lead us not into temptation.

3. His sin was the his heart was lifted up, v. 25. He was proud of the honour God had put upon him in so many instances, the honour his neighbours did him in bringing him presents, and now that the king of Babylon should send an embassy to him to caress and court him: this exalted him above measure.

When Hezekiah had destroyed other idolatries he began to idolize himself. O what need have great men, and good men, and useful men, to study their own infirmities and follies, and their obligations to free grace, that they may never think highly of themselves, and to beg earnestly of God that he will hide pride from them and always keep them humble!–Robert Jamieson, A. R. Fausset and David Brown, Commentary Critical and Explanatory on the Whole Bible (Oak Harbor, WA: Logos Research Systems, Inc., 1997), 2 Ch 32:31.

In our individual journeys to seek His face, we must pray and pray often. Yesterday’s prayers are not sufficient for today, for as the Apostle Paul declared, we stand in jeopardy every hour! And when that sweet Spirit of the Lord deliberately withdraws from our hearts, which leaves us feeling empty and desperate, in order to test us, it is then that we truly discover who we are without Him. It is imperative that we learn to be godly without Him to uphold our hearts, else we might find ourselves, like that son of morning, fallen from heaven and cast down to Earth because of our pride and lust and vanity.

Isaiah 14:11 Thy pomp is brought down to the grave, and the noise of the viols: the worm is spread under thee, and the worms cover thee.
12 How art thou fallen from heaven, O Lucifer, son of the morning! how art thou cut down to the ground, which didst weaken the nations!
13 For thou has said in thine heart, I will ascend into heaven, I will exalt my throne above the stars of God: I will sit also upon the mount of the congregation, in the sides of the north:
14 I will ascend above the heights of the clouds; I will be like the most High.
15 Yet thou shalt be brought down to hell, to the sides of the pit.

2 thoughts on “Why Hast Thou Forsaken Me?”